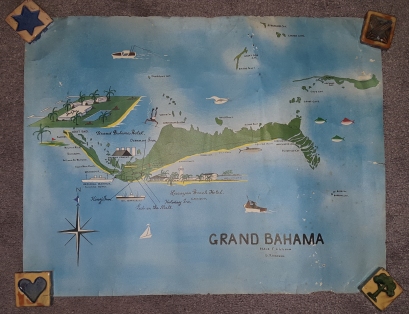 While living in Miami, I went to my fair share of estate sales. It was my attending sales so much that led me to work for the region’s best estate sale company. At one of those sales, in one of the not-nicest homes in the area, I ran across this poster in the bottom of a closet. It was such a sad, rolled-up crusty thing that when I took it to the door to have a price assigned to it, I was waved away. “Ehhh, keep it, honey,” the woman running the sale said.

I’ve admired it for over two years. I kept good care of it because despite the holes and rough edges, I knew that I could work with this piece. It was just a matter of finding the right frame/decor/room/space opportunity. The map pointed out lots of destinations or points of interest, and whoever owned the poster also added their own notes. It’s so cute and retro. The little fish images, all of the boats, the famous JackTar Club, which opened in 1960. (Reference here and here.)

This fabulous black frame came in to my life in Indiana roughly a year later. I couldn’t have paid more than $5 for it; it’s pretty rough. 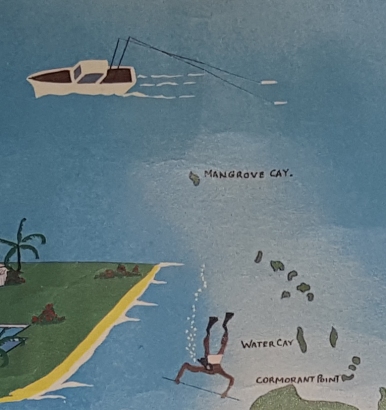 Cut to today, when I decided I wanted to talk about the Bahama poster. I needed something to set over it so it wouldn’t roll up and the old, crusty black frame with the knot that comes out was right there.

I’ll be getting this to the framer next week. Be prepared for updates.