I couldn’t help it. They’re classic. There were five of these little charmers. These dishes carry with them the sounds of a 1960’s diner. Heavy, simple and melodic.  They have a scalloped edge, not too frilly, with two red stripes on the interior of the plate, and a crest with the letter “C” inside. On the backs, they read “SYRALITE by SYRACUSE 98-8 U.S.A.”

I snatched them up at a local thrift store here in Liberty, Missouri a few months ago, thinking my son may like them for when he gets his first off-campus apartment. I think they’re super-country clubbish and jazzy.

Syracuse has been been around for many years, and has a mind-boggling body of work that served airliners, trains, diners across the U.S. and other large-scale dining establishments.

Wikipedia says this and more: Syracuse China Corporation, located in Syracuse, New York, was a manufacturer of fine china. Founded in 1871 as Onondaga Pottery Company (O.P. Co.) in the town of Geddes, New York, the company initially produced earthenware. In the late 19th century, O.P.Co., began producing fine china, for which it found a strong market particularly in hotels, restaurants, and railroad dining cars. The manufacturing facility in Syracuse closed in 2009, after 138 years in operation and production was removed from North America.

I would venture a guess that the crest is associated with some country club or restaurant, but my research turned up no matches as of yet.

Anyway, I loved the feel and the look of the little plates, so I brought them home and quickly hid them from my husband. Like we need more frickin’ plates. 🙂 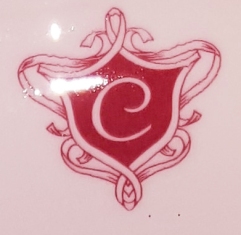 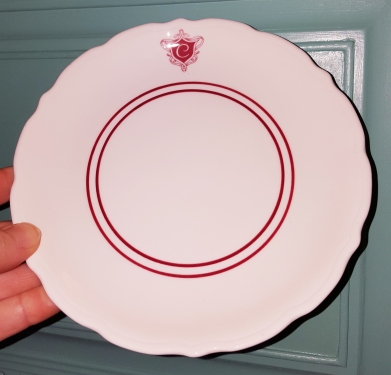 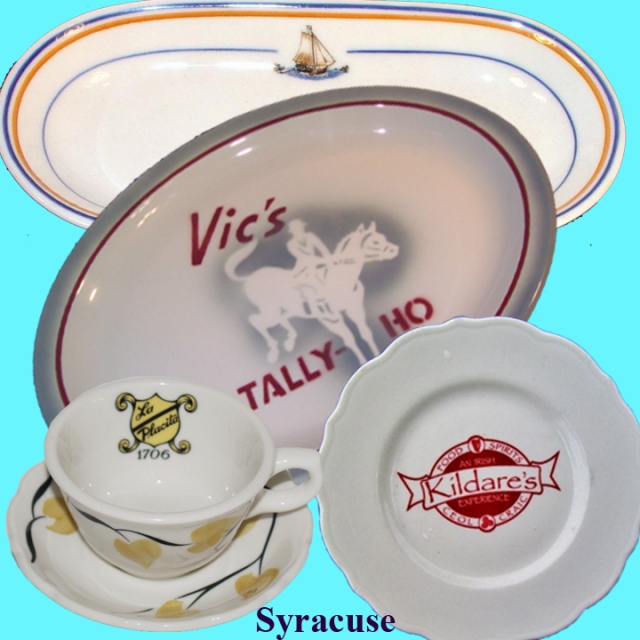 I bought this little nugget of history at an estate sale in Baltimore a year or two ago. I grabbed it up out of reverence more than anything. I mean, the thoughtfulness of this guy to write down his family history and publish it for the ages – I admire Mr. J.A. Keck.

This little booklet has additional family history dates and notes in the margins and attached throughout. My only hope in posting these images (and a considerable amount of SEO attached), is to draw a family member to this site one day. I’m saving it for you, Keck clan! You need only contact me to procure this fabulous piece of family history.

I believe I bought other family photos from this sale. Just send me a note to get these in the right hands. 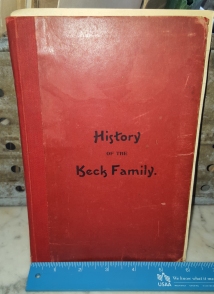 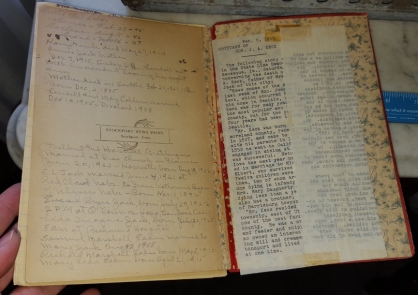 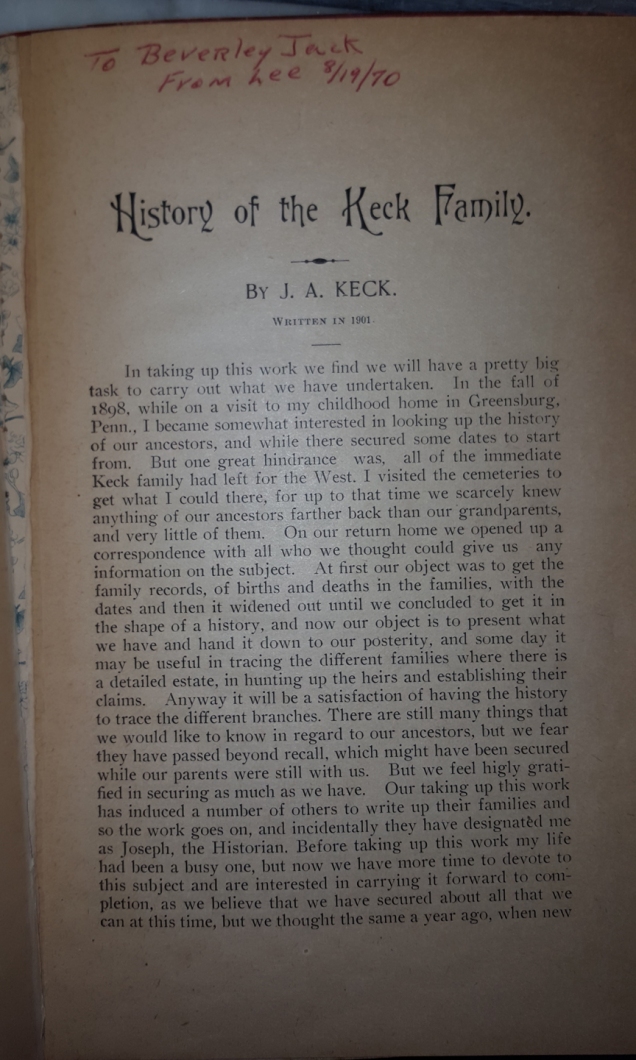 My husband and I have lived a few places together. We have lived in larger homes with lots of space, and we’ve lived in hotel rooms. Right now, we’re somewhere in the middle. We have a little slice of heaven in Liberty, Missouri with a nice fenced-in yard for our three dogs and our home is just under 1,000 square feet. Compared to the hotel rooms it’s palatial, but our furniture was bought several years ago for a much larger home with much larger rooms, so we’re trying to adjust.

Which brings up the point of our entry way. It is small and leads into a room that we are struggling to make do with our current furniture until we feel like the timing’s right (first in line: 2015 tax bill, new washing machine, etc.), which means we really don’t want ONE MORE piece of furniture in the living room. But where to put our keys when we walk in the door?

I came up with what I think is the perfect solution, after having cruised ebay and other sites for “floating shelves”. New shelves cost hundreds of dollars and old ones, well, they were too ornate for our 1963 home. So I found this drawer at an antique mall in Fort Leavenworth, Kansas. It was more than I would ordinarily spend ($24- *GASP!*) but the size and color were spot on as-is.

Initially, I thought I would just have the hubby put it up as is, with the patina and the weathered look, but Mr. Wonderful was pretty adamant that it wouldn’t work, considering the living room has a brand-spanking-new coat of paint on the walls AND the trim, which is now stark white. It’s a crisp look and he felt like a rubbed-out old catalog drawer would clash, and I’m sure he was right. But we both liked the turquoise color, so we agreed I would paint it the same color, just without the wood rubbed through and with the inside of the drawer painted too. But, I insisted, the drawer pull stays.

The solution came one afternoon when I was looking over some old retro napkins I had bought some months earlier. I decided that their designs would be FABULOUS with the color of the shelf, so I cut out two pieces of cardboard that exactly fits in the bottom of the drawer and I covered them. One was covered in one of the napkins, the other with a piece of embossed white wallpaper I had just picked up for $1 at an estate sale. Then I inserted them into the shelf to see which one worked best. The white option showed best with the stark white trim around it, so that’s what I picked! I hope you like it; we sure do! 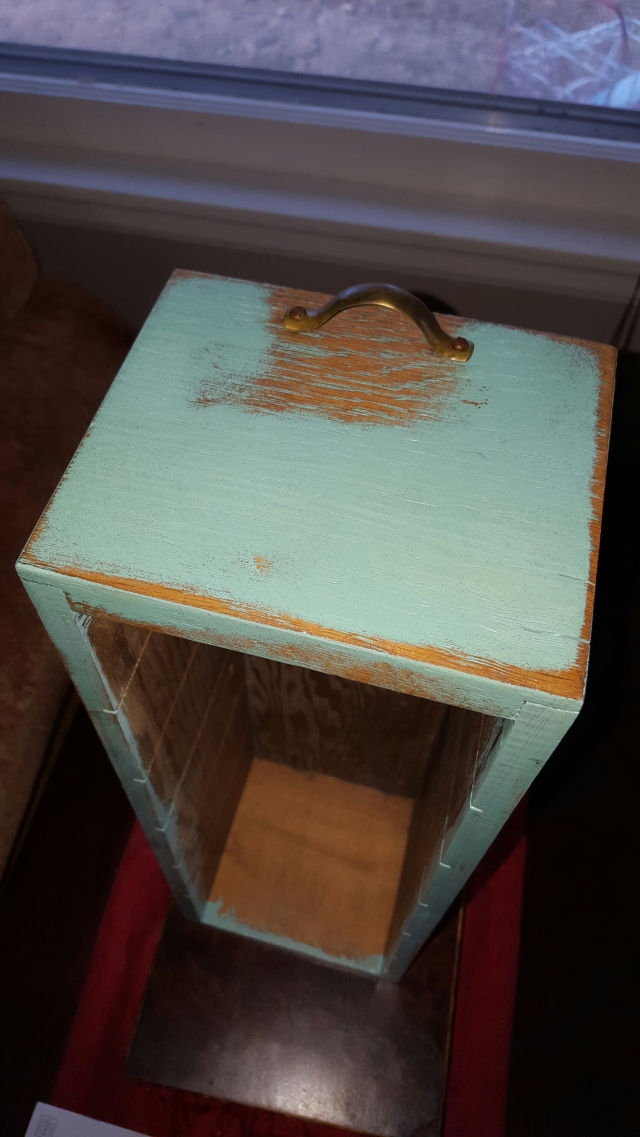 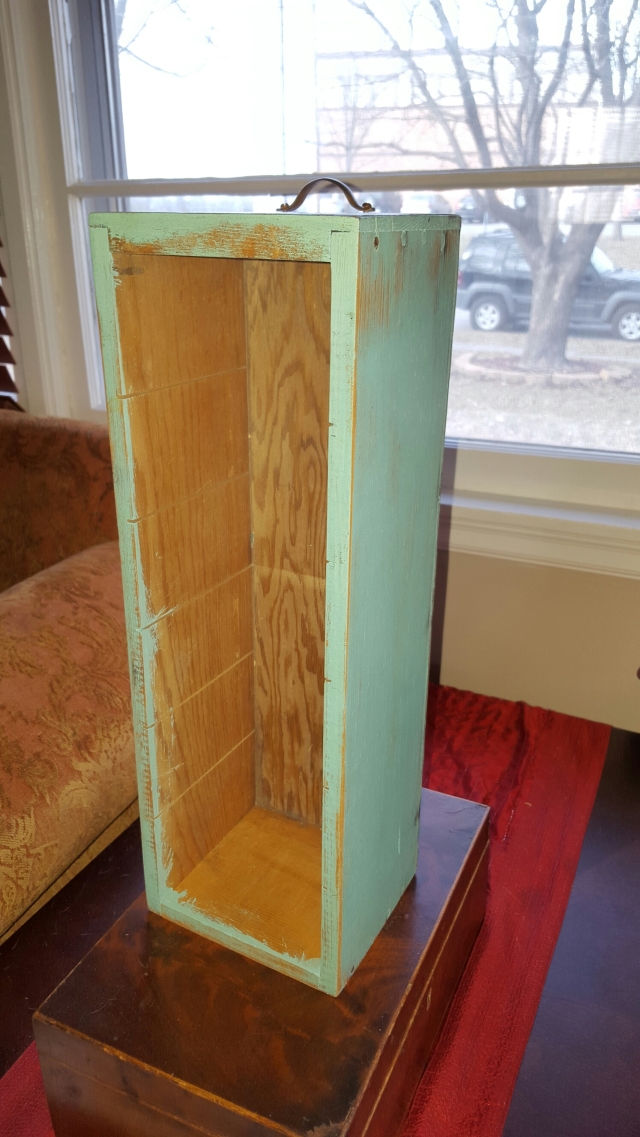 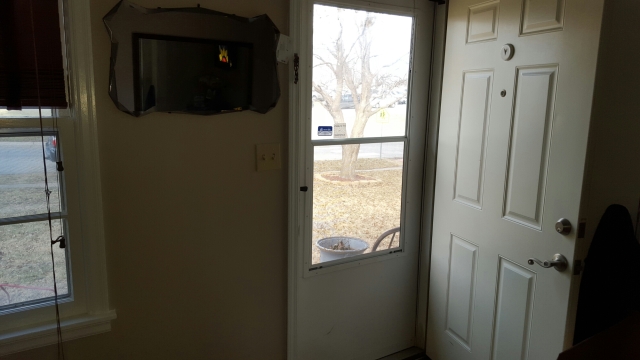 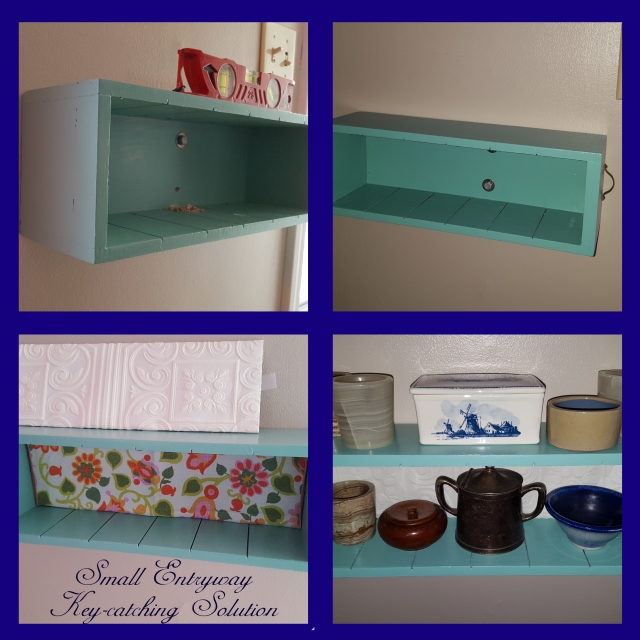 In progress! Which insert to use and what to decorate it with – all small items considered!

Putting the shelf up meant big bolts, because we may decide to hang hooks off of it for my purse, which is like a bag of bricks. So the challenge was to hide them. Voila!

Today’s major accomplishment was small in size but kind of a big deal; it’s been something I’ve been meaning to do for awhile. Since we had rain here today, I had to think about projects I could get done around the house INSIDE, so it was my perfect opportunity.

See, I have just recently completed my project to paint each room of the house. So I’m pretty proud of the colors. I think it takes it up a notch in my house. And I’m pretty proactive with my covering up of scuffs and random miscalculated nail holes but I got tired of having to bring up a gallon paint can each time I needed to touch up the walls. God forbid I want to get them all done in one day. So I decided to use one of the vintage spice racks I’d collected over recent months to put a little bit of paint from each room. I’m kind of proud of the idea. I gave them little labels too.

Other folks are doing some cute things and finding ways to reuse these little shelves. 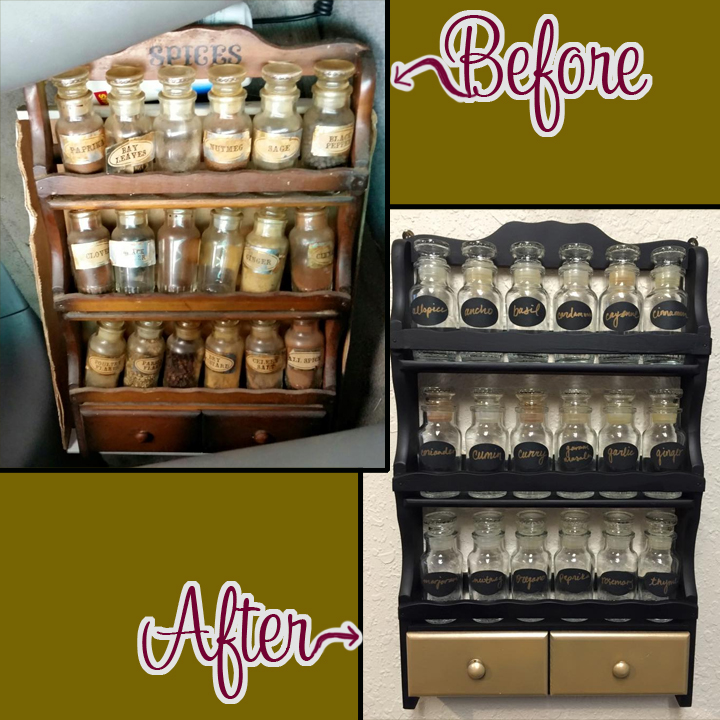 It all started when a friend asked me to be on the lookout for a spice rack to repaint and use once again for spices. It took a few months but I finally found one. My friend posted before and after pictures on Facebook, showing off a black shelf and labels with gold accents. Another friend immediately asked me to find another one for them. So I started just grabbing every spice rack (that wasn’t already in pristine or otherwise acceptable condition) I saw.

My husband has even found a use for many of the little shelves. He’s a vaper and has lots and lots of ejuice flavors from companies like Heresy. The number of flavors he has is monumental and he needed a place to put them that wasn’t demanding so much of his precious, office horizontal real estate. He now has several throughout his office, even one in his closet to keep sunlight off for the bottles he’s steeping himself. Some he’s painted red, some white, and some are not getting a paint job at all. He even wrote a blog about it here, which prompted me to share my info with you too.

It’s so exciting to find and get people to think about reusing old items that are no longer in style or just need a coat of paint. What else could these little cuties be used for? 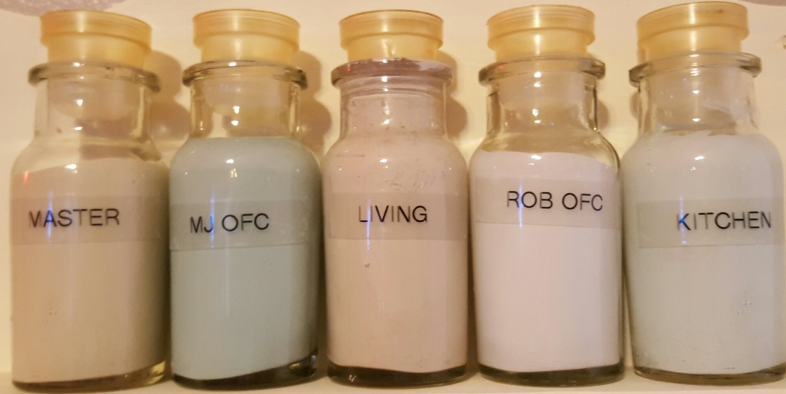 We lived in Baltimore for about ten months. While there, I found myself enjoying the old architecture, the history and fabulous thrift stores full of antiques. On one of my outings, I came across this buffet. It was in a thrift store I rarely went to and it was sitting at the end of a clothing row, away from the other furniture. The price was $15. It was dirty, no, really filthy, but I could see the beauty underneath. The wood was still good and the intricate carvings on the legs, doors and skirt were fabulous. So I bought it. It wouldn’t fit in my trunk (rental car that week) so I had to arrange to come back and get it. When I did, this nice older gentleman employee helped me load it, so I paid him $5. 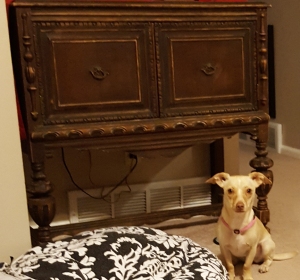 It was two years later that I actually took paint to it, and these photos represent the crossroads. I couldn’t decide if it needed more paint above the doors and I also needed to order replacement antique pulls. So I put it to a vote on my Facebook page. People were all over the map on this one, but the consensus was that it was looking pretty darned good.

Usually I like to research the maker and find corresponding pieces online to tether to. Unfortunately, the tag that might have told me where this came from or who made it is gone from the back of the buffet, but no matter.

It has a place of honor in my living room, right underneath a stained glass piece I commissioned from one of my best friends, Beth Hanna of Baha Beauties. 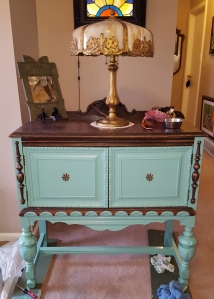 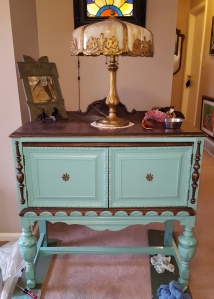 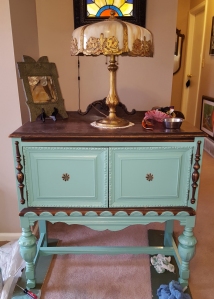 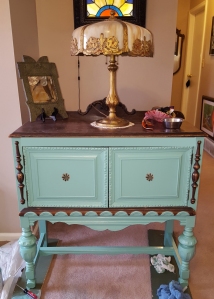 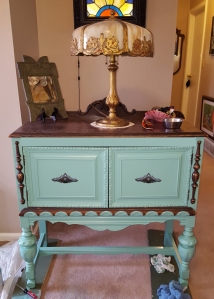 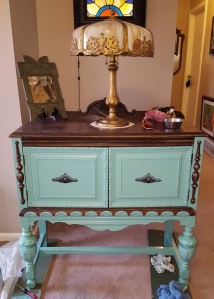 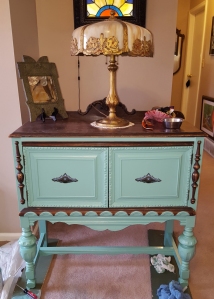 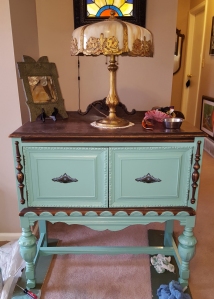 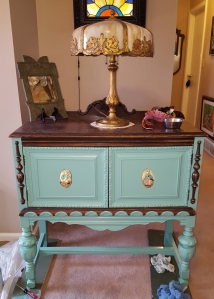 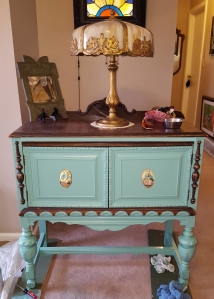 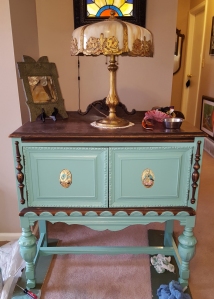 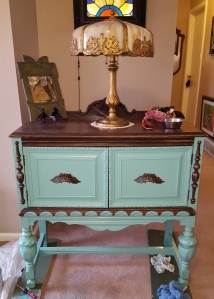 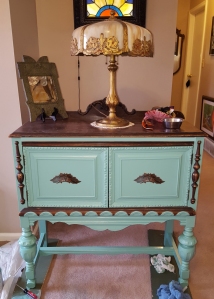 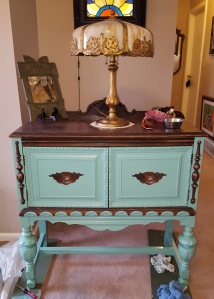 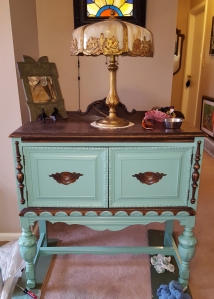 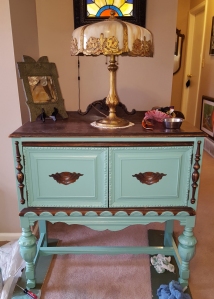