I might be a little weird. I get a charge out of buying old attributed photos and finding their family members to share them with.

I don’t pay much for the photos, I’d say never more than $5 each. Since I’m a member of Ancestry.com, I’m able to take the information presented – usually just a name and location – and start digging for a match. Men are easier to track down because we women like to change our names to match our husbands’, but I’ve found some of the women too.

Belle and Lulu Driskell caught my eye at an antique store on a business trip to Iowa. They were so naturally beautiful and the information on the back of the cabinet card photo was more than enough to track them down. Their married names were included, the city the photo was taken in was included, the date it was taken was even noted! I ended up getting in touch with someone who had posted their family tree on Ancestry and they were so excited. They said they had never seen photos of the sisters before, so I was doubly excited to share them. Isn’t Lulu gorgeous?

I always offer to email the image to the family for no charge but if they want to buy the original they need to reimburse me. Most of the time they just want the scanned image, which is fine too!

Mr. Meldahl just found his home this week, thanks again to Ancestry. It was also pretty easy to find him because his name is unusual, the city name is there and if I needed to dig really deep, I could find out when the photographers were in business in order to determine when the picture was taken, but I didn’t have to go that far. 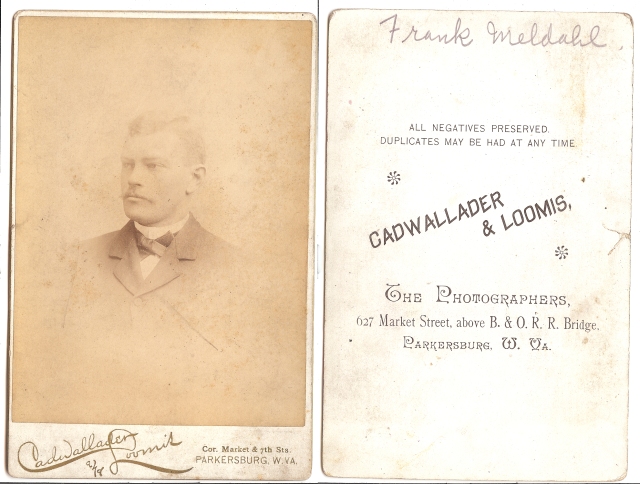 Cabinet Card of Frank Meldahl by Cadwallader and Loomis – Cor Market & 7th Sts. Parkersburg, W VA. All negatives preserved. Duplicates may be had at any time. Cadwallader & Loomis, The Photographers, 627 Market Street, above B. and O.R.R. Bridge, Parkersburg, W. Va.

Mr. & Mrs. Sproul were a little more difficult but not very. With the added “Mother Perkins” reference on the back of Mrs. Sproul’s photo, I was able to pinpoint a potential family. Just moments ago I emailed the images to a family member. Even without the location, it was a doable endeavor to track their family down.

The Blackmans were SO EASY. I mean, check out the information detailed on the back! I had everything I need to find, verify and get in touch with their people quickly, and I sent off the image within a day of finding the family.

I’m still waiting to hear back on another batch of photos and some I fear I’ll never match to interested parties, but it’s fun to try. And I guess I’m hoping if someone ever comes across my family photos, they’ll take the time to find me too. 🙂