One recent Saturday in Coral Gables found me at a garage sale close to the University of Miami campus. The sale was being run by two sisters in their 80s, and one of their daughters. The women were Southern and had all of the charm you would expect. From what I gathered, their husbands had passed, as they were selling men’s clothes along with their colorful clothing, various furniture and other fabulous items. I bought a few things and returned the next day to check it out again. On the second day, I grabbed up some fabulous designer clothes (one of the sisters was quite the entertainer in her day) and various items. As I was leaving, one of the sisters directed me to a couple of wood balusters. “My husband and I bought these over 50 years ago when they were tearing down an old mansion in Charlotte,” she explained. “We planned to make them into lamps and he even sanded them down to get them ready…” she trailed off.
The home she was talking about was the Edward Dilworth Latta mansion which was demolished in 1965. These heart pine balusters are bulky, heavy and pretty fabulous in their simplicity. She was worried that no one would take them and strongly suggested I fulfill their plan to make them into lamps. I couldn’t guarantee I would, naturally, but I’m a sucker for provenance and after agreeing on a price I brought them home. I reached out to an architectural salvage company in Charlotte later that week but they were not interested. So the question becomes, “What do I do with them now?” 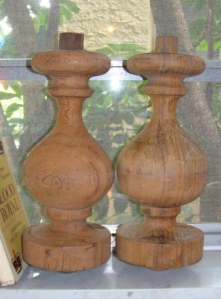 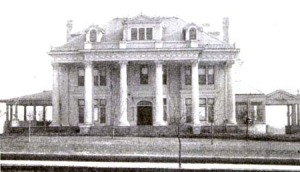